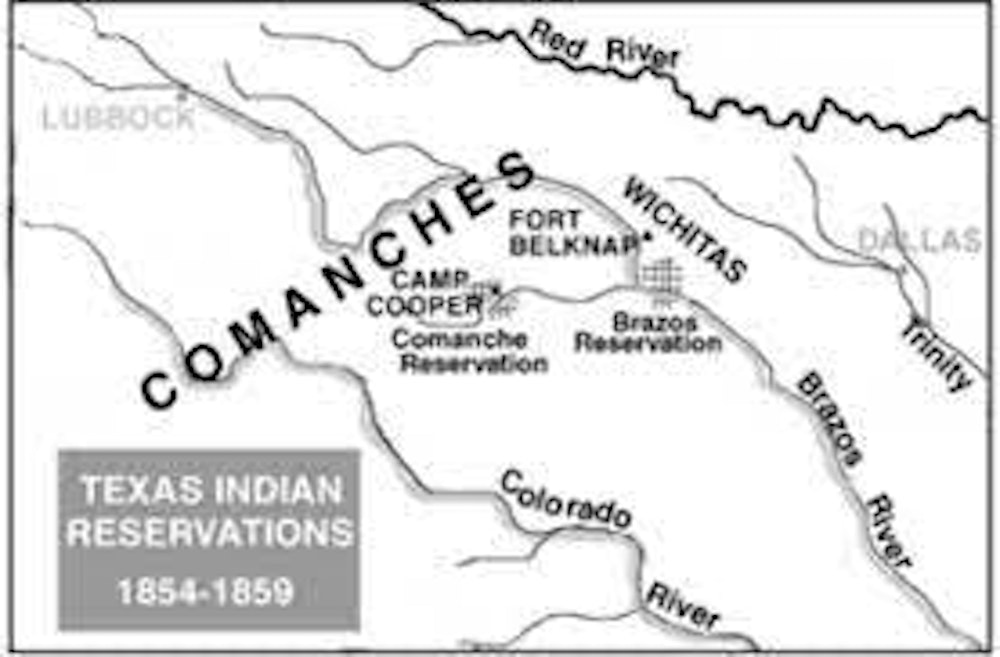 Marcy and Neighbors did their job and after consulting with the Native American groups that the reservations were being created for, the chose a site of four leagues of land on the Brazos River near Fort Belknap, near modern Newcastle in Young County. This would be home for the Caddos, Wacos and others.

A second site was selected forty miles away on the Clear Fork of the Brazos.

This would be the reservation for the Comanches.

Too make a long story short, things were difficult for the reservations.

The Brazos Reservation became home to about 2,000 Native Americans. Caddo, Anadarko, Waco, and Tonkawa Indians had their own villages. These peoples were already successful farmers and had been for generations and grew corn, wheat, vegetables, and melons.

After the treaty of August 30, 1855, about 450 of the Penateka or southern Comanches settled on the reservation established for them. They were taught to cultivate corn, melons, beans, pumpkins and other vegetables and they did very well, or would have had it not been for extreme drought that kept them from growing all that they needed.

When Kickapoos, northern Comanches and others raided, the inhabitants of the reservations were blamed. The reservations were too close to the old Comanche raiding trail into Mexico and troublemakers would intrude from it and entice some Comanches to join them on raids. There wasn’t enough protection from the federal troops for the reservation, and disappointingly, white hostility to the Native Americans living on the reservations was intense and hard to control from erupting into violence.

Things were on the verge of getting out of control by 1858 and the safety of the reservation dwellers was a major of great concern due to white hostility and threats. They were removed from Texas and sent to Indian Territory in 1859.

Both reservations reverted to the state when this happened.