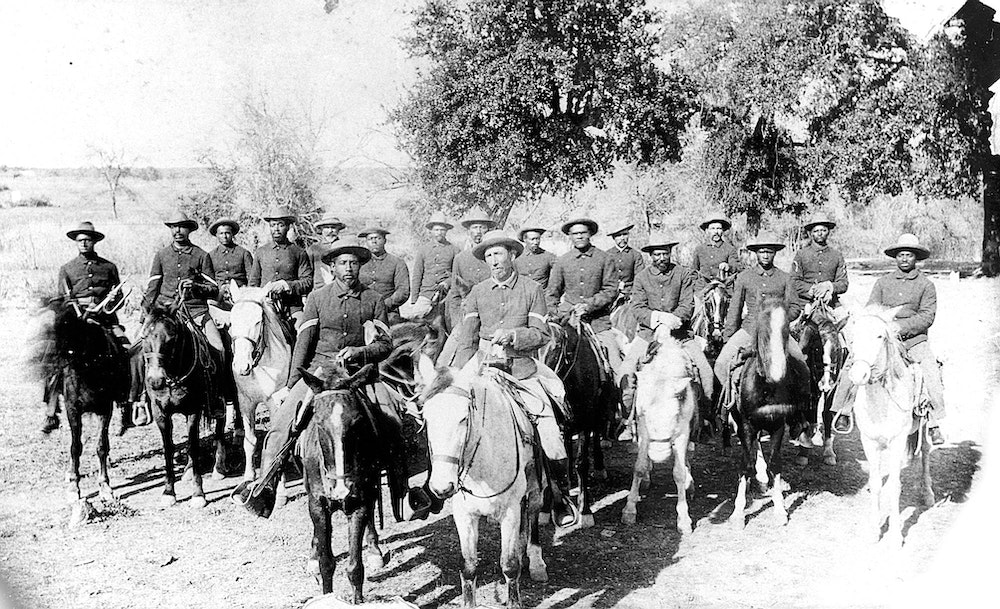 On April 25, 1875 three Black Seminole Scouts performed acts of bravery that earned them the Medal of Honor.

After living in Mexico since 1850, several Black Seminoles crossed the Rio Grande in 1870 with hopes of someday returning to Indian Territory. With that goal in mind, many of them agreed to serve as scouts in the United States Army and they quickly gained a great reputation for their valor and service as Black Seminole Indian Scouts. Based out of Fort Clark near modern Bracketville, Texas, they participated in regular patrols to watch against property raids by Native Americans. For much of the existence of the Black Seminole Indian Scouts were commanded by Lieutenant John L. Bullis. One of the scouts, Joseph Phillips, had this to say of Bullis: “That feller suffer just like we did out in the woods. He was a good man. He was a Injun fighter. He was tough. He didn't care how big a bunch they was, he went into 'em every time, but he look after his men. His men was on equality, too. He didn't stand back and say 'go yonder,' he say 'come on boys, let's go get 'em."

For over a week Lieutenant Bullis and Black Seminole Scouts Sergeant John Ward, Private Pompey Factor, and Trumpeter Isaac Payne had been pursuing a band of Comanche or Apache raiders that had stolen about 75 horses on a raid. Remember that this was after the Black Seminole Scouts had participated in Mackenzie’s Red River War the previous winter that pretty much led to most of the Kiowas and Comanches settling in Indian Territory on their reservation near Fort Sill. Still, some bands did not completely end their raids.

Four days before April 25, the four had separated from a larger force and traveled west alone. They road their horses with a few supplies and armed with Spencer carbines. They followed a trail for 170 miles over three days. They found a fresh trail and northwest towards Eagle Nest Crossing and reached the Pecos River.

They found the raiders herding the horses across to the west bank of the Pecos. They counted 75 horses and twenty-five to thirty raiders. So what do you do with a force of four against those odds? Well, Lieutenant John Bullis decided to attack.

Bulis, Ward, Factor and Payne crawled down the canyon until they were 75 yards away and opened fire. They held the position for about 45 minutes and their efforts had started to disperse the horse herd. The Comanches located the position of the four men and started to outflank them.

Bullis and the Scouts started to draw back towards their horses. The Comanches were in hot pursuit. Ward, Factor and Payne were able to mount their rides and started to withdraw but Lieutenant Bullis’s horse spooked and he was stuck afoot.

Sergeant John Ward realized the dire predicament his commander was in and wheeled around to head to the rescue with Isaac Payne and Pompey Factor following. Payne and Factor laid down cover fire while Ward reached Bullis and pulled him up behind. Ward’s carbine’s stock had been shattered by a bullet just behind the breach. Bullis was definitely a dead man had they not done this and the threat was so great that their return could have meant their deaths too. Instead, as the raiders fired on them, all four were able to ride away and escape.

For their courage above and beyond the call of duty at Eagle’s Nest Crossing on April 25, 1875, John Ward, Isaac Payne, and Pompey Factor were awarded the Congressional Medal of honor on May, 28, 1875.